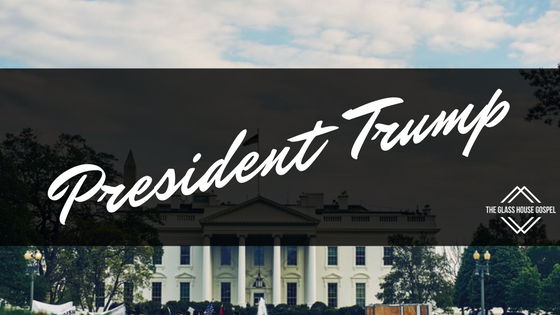 In less than 24 hours, the United States will have a new President at the helm of what is considered one of the world’s greatest super powers. You may have voted for him. You may have protested against him.

Regardless, tomorrow at 12:00 Noon EST, Donald J. Trump will be sworn in as the 45th President of the United States of America.

That said, here are some things to consider:

After the election, John Piper tweeted a verse from the Bible. It was Hosea 13:11 and it read “I gave you a king in my anger”. Originally, I was going to end my point there, but after reading all the responses John Piper received to this tweet, I feel something needs to be said.

For those Christians who support Trump (and by support, I don’t mean a kind of “well he is president so I guess I’ll support him” support. I mean the “I’m thrilled to have this man as president” kind of support), let me say one thing: do not let power blind your eyes to the Gospel. Many Christians chose power over people in this election. What I mean is, they said loudly and boldly “I would rather have a man who goes against everything my Lord believes in as President than a democrat”. They chose a political party over Jesus.

Do not be so blinded by your zeal to “repeal Obamacare” that you can not see the plea of the millions who will be without health insurance because of said repeal. Do not be so hardened by your belief that “trickle down” and “lower taxes” work that you would pull funds away from Social Security, Medicaid, Medicare, and many other programs just to save a few bucks. Do not listen to the rumors of the “lazy poor” and shouts of “they want handouts” so much that you become deaf to the children going to sleep hungry because their parents’ food stamps were cut and their jobs pays them a poverty wage.

Do not live a life that would cause Jesus Christ to say to you “I never knew you; depart from me, you workers of lawlessness“. Do not just be hearers of the word and not doers. Do not deceive yourself.

Grace & Peace to you all.

Christina Arteaga (who sometimes goes by Christina Chanel) is, quite simply, a grace addict. Everything else in her life stems from her love of Jesus Christ. She is a wife, a mother, an artist, and a writer, but most importantly, she is a child of a God and a worshipper of Jesus Christ. View all posts by christinaxarteaga