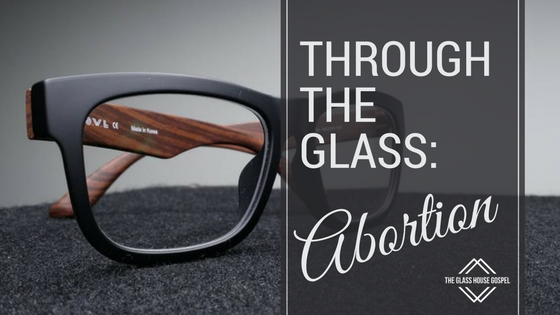 (Every so often, The Glass House Gospel will publish posts prefaced with “Through The Glass”. These posts are intended to take hot button issues, break them down so that we may understand where the opposing sides are coming from, then offer a biblical, gospel-centered approach and, if possible, a compromise to please both sides [when neither side is going directly against the Word of God]).

SIDE NO. 1: Pro-Life: To be pro-life, according to Merriam-Webster, is to be “opposed to abortion”. A pro-lifer believes that life starts at conception. If they adhere to a religion, they usually also believe that the god of their religion (or, for us Christians, God Himself) has put life into the womb. Because of that, it would be a violation of both the will of God and the Word of God to end a life prematurely. When it comes to the law, a pro-lifer usually favors a ban on abortion and a de-funding of planned parenthood. By extension, some also favor “abstinence only” teaching in schools, along with limiting access to contraception (as some Christians believe it violates the will of God to use any form of contraception). In general, pro-lifers say that “giving the baby up for adoption” or “keeping the baby” are good alternatives.

SIDE NO.2: Pro-Choice: To be pro-choice, according to Merriam-Webster, is to “favor the legalization of abortion”. While it can vary from person to person, generally speaking, a pro-lifer believes that during the first trimester (and some of the second), a fetus is just a “clump of cells” which belongs to the mother. Because of this, it is a women’s right to choose an abortion, if she feels that is the right option for her. Some would stray to the right, saying it must be done before a heartbeat can be detected, while others would stray more to the left and say that an abortion can be performed “any times before the baby is born”. For the most part, pro-choicers agree that an abortion should be performed at a time before the baby is viable outside of the womb. They believe that Planned Parenthood is vital to society and fight to keep them active and alive. They also tend to believe that the best sexual education is comprehensive, complete with teaching students how to use contraception and have safe intercourse.

IS A BIBLICAL COMPROMISE POSSIBLE?: Yes and no. When it comes to abortion, there is little to no room to argue for it. Simply put, we now know that the heart beat begins sometime around the 5th week of pregnancy. Coming from experience of having two pregnancies, that’s usually around the time women suspect they are pregnant. So, when women find out, their baby’s heartbeat has already begun. By six weeks, facial features have already begun to form. It is hard to argue that this “clump of cells” is not a person, which would mean that abortion would be murder (no matter how you spin it).

However, I do believe a compromise can be reached elsewhere, one that would actually lower the number of abortions performed.

THE GLASS HOUSE GOSPEL: So, while I would agree that abortion is a sin and there is little wiggle room there, I would argue that many Christians aren’t “pro-life”; they’re just “anti-abortion”.

What I mean is this: many Christians are quick to stand outside a Planned Parenthood with signs, but they fight against things that would actually help a mother raise a child. Things life raising the minimum wage (which helps both mother and father earn more to support a family), better quality daycare and guaranteed access to it (which would allow lower-income families to continue working to provide for their family with peace of mind that their children are well taken care of), guaranteed access to contraception (which would prevent unwanted pregnancies), and more. But Christians (who tend to also be Republican) vote down these measures. How can you expect a woman to feel confident in raising a child if she can barely afford to eat?

“Well, adoption is always an option”. The problem with that line of thinking is our small view on the matter. If abortion were illegal, one or two more babies in the “system” wouldn’t be a big deal, but the truth is, MANY children would enter an already flooded system. Christians are quick to denounce abortions, but aren’t as quick to adopt the children that come from making abortion illegal.

Simply put, Christians should support measures to ban abortion (because it is murder and the person whose life is being ended has no say in the matter), however, this support should be in conjunction with supporting measures to guarantee access to contraception, raise minimum wage, create quality daycare (that is guaranteed), create free public colleges (also guaranteed), create quality schooling accessible to all income levels (guaranteed), etc. The issue isn’t the access. The issue is making sure women who feel like they can’t raise a child don’t have another reason to abort.

Don’t just be anti-abortion. Be pro-life.