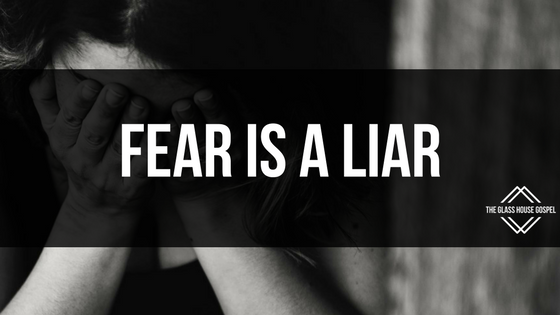 Fear Is A Liar

Have you ever felt afraid?

Maybe you were afraid for you life. Maybe you felt anxious, your palms sweating and your lungs short of breath.

Let me drag that fear into the light and say FEAR IS A LIAR.

Our feelings are real, but fear twists our perception and distorts the truth. It lies to us, shames us, and deceives us into making the situation 10X worse than what it is.

I remember the first time I heard that song I quoted earlier on the radio. It was as if God Himself wrote that song and sent it to the radio with a note attached that read “one of my daughters currently feels scared and anxious. Play this right now“.

At the time, I was feeling scared. The devil had whispered a lie in my ear and I took the bait. I was driving in my car, a million thoughts racing through my head, but when this song played, it’s as if God had said, “Daughter, none of that is true. You’ve been lied to. Just trust Me.” And He was right. It was a lie. Fear had taken something small and distorted it, robbing me of my peace and joy (If even for just a moment).

Today, I was looking at old pictures of myself and I realized something. (I’m about to get really transparent, so bear with me). See, I bought the lie that I was somehow unlikable. I truly believed, for years, that people just didn’t like me and never truly would. I believed that lie as recent as a few hours ago. People liked everyone but me, and because of that, I retreated. I didn’t go to events with friends, I spoke very little around people I didn’t trust fully, and despite being an extrovert who needs interaction with others, at the first sign of rejection, I completely abandoned friendships (for fear of them outright rejecting me first).

The fear of rejection had completely crippled me.

But the pictures I found told a very different tale than the one I had chosen to accept as reality.

Here were a ton of pictures with groups of people. Tons of events I had been invited to, that I showed up to, had been documented. Things I had completely forgotten about. I was a bit saddened that I had chosen to hide these pictures in the first place, but it also brought me joy to know that it was a LIE that I was completely unlikable.

Had some people rejected me because I “fell” and wasn’t a “good Christian” anymore? I’m sure some did. Had some people stopped talking to me because I no longer had anything to offer them? Maybe. Do I think some people tried to rekindle a friendship with me after years of pretending I don’t exist because I was suddenly married to “Lawren” and it would benefit them? I think so.

But even so, it was not as prevelent as I thought. A small percentage of my “friends” were like that. Most weren’t.

I had been lied to, but the revelation of the truth felt like FREEDOM.

What lies have you been believing brothers and sisters? Where has the enemy managed to warp your worldview and steal your joy? We have FREEDOM! Look behind you! Your chains have been BROKEN! Fear can no longer hold you captive; neither can shame, sin, doubt, etc! Nothing can cancel out the cross!

Brothers and sisters! Read these verses from the very Word of God and take a breath from the fresh air of freedom!

“Peace I leave with you; my peace I give to you. Not as the world gives do I give to you. Let not your hearts be troubled, neither let them be afraid.” – John 14:27

“I have told you these things so that in Me you may have peace. In the world you will have tribulation. But take courage; I have overcome the world!” – John 16:33

“I sought the LORD, and he answered me and delivered me from all my fears.” – Psalm 34:4

“For I am convinced that neither death, nor life, nor angels, nor principalities, nor things present, nor things to come, nor powers, nor height, nor depth, nor any other created thing, will be able to separate us from the love of God, which is in Christ Jesus our Lord.” – Romans 8:38-39

Confess your fears and rip them of their power over you.

Lay your fears down at the cross.

Christina Arteaga (who sometimes goes by Christina Chanel) is, quite simply, a grace addict. Everything else in her life stems from her love of Jesus Christ. She is a wife, a mother, an artist, and a writer, but most importantly, she is a child of a God and a worshipper of Jesus Christ. View all posts by christinaxarteaga